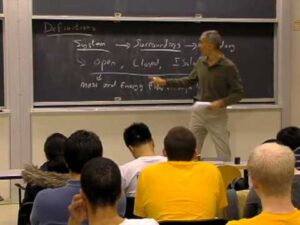 MIT 5.60 Thermodynamics & Kinetics, Spring 2008Prof. Keith A. Nelson and Prof. Moungi Bawendi
Read More
This subject deals with both chemical thermodynamics and chemical kinetics. The material that will be covered in this subject is intended to provide you with the tools and understanding to handle basic problems involving chemical systems at equilibrium and rates of simple chemical reactions. 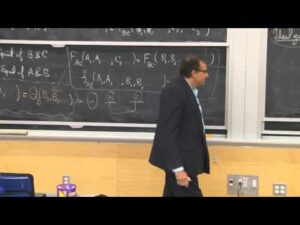 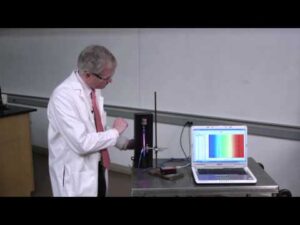 Statistical Molecular ThermodynamicsProf. Christopher J. Cramer
Read More
Statistical Molecular Thermodynamics is a course in physical chemistry that relates the microscopic properties of molecules to the macroscopic behavior of chemical systems. Quantized molecular energy levels and their use in the construction of molecular and ensemble partition functions is described. Thermodynamic state functions, their dependence on the partition function, and their relationships with one another (as dictated by the three Laws of Thermodynamics) are all examined in detail. Analysis and demonstration takes place primarily in the context of ideal and real gases. By Prof. Christopher J. Cramer of the University of Minnesota. 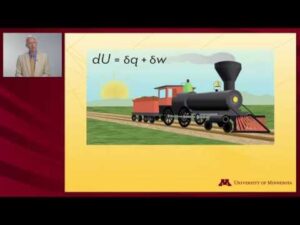 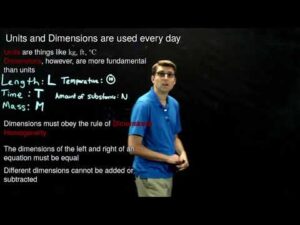 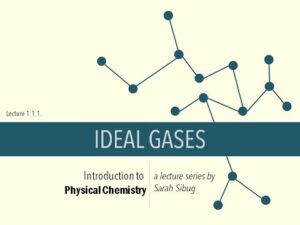 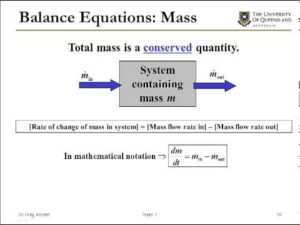 This free ebook in PDF format is a revised and enlarged version of the first edition that was published in hard-cover format in 2001 by Prentice Hall. Thermodynamics and Chemistry is designed as a textbook for a one-semester course in classical chemical thermodynamics at the graduate or undergraduate level, and can also serve as a supplementary text and thermodynamics reference source.

This textbook introduces thermodynamics with a modern approach, starting from four fundamental physical facts (the atomic nature of matter, the indistinguishability of atoms and molecules of the same species, the uncertainty principle, and the existence of equilibrium states) and analyzing the behavior of complex systems with the tools of information theory, in particular with Shannon’s measure of information (or SMI), which can be defined on any probability distribution. SMI is defined and its properties and time evolution are illustrated, and it is shown that the entropy is a particular type of SMI, i.e. the SMI related to the phase-space distribution for a macroscopic system at equilibrium. The connection to SMI allows the reader to understand what entropy is and why isolated systems follow the Second Law of Thermodynamics. The Second Llaw is also formulated for other systems, not thermally isolated and even open with respect to the transfer of particles. All the fundamental aspects of thermodynamics are derived and illustrated with several examples in the first part of the book. The second part addresses important applications of thermodynamics, covering phase transitions, mixtures and solutions (including the Kirkwood-Buff approach and solvation thermodynamics), chemical equilibrium, and the outstanding properties of water.

This textbook is unique in two aspects. First, thermodynamics is introduced with a novel approach, based on information theory applied to macroscopic systems at equilibrium. It is shown that entropy is a particular case of Shannon’s measure of information (SMI), and the properties and time evolution of the SMI are used to explain the Second Law of Thermodynamics. This represents a real breakthrough, as classical thermodynamics cannot explain entropy, nor clarify why systems should obey the Second Law. Second, this textbook offers the reader the possibility to get in touch with important and advanced applications of thermodynamics, to address the topics discussed in the second part of the book. Although they may go beyond the content of a typical introductory course on thermodynamics, some of them can be important in the curriculum chosen by the student. At the same time, they are of appealing interest to more advanced scholars.

Thermodynamics, An Engineering Approach, eighth edition, covers the basic principles of thermodynamics while presenting a wealth of real-world engineering examples so students get a feel for how thermodynamics is applied in engineering practice. This text helps students develop an intuitive understanding by emphasizing the physics and physical arguments. Cengel and Boles explore the various facets of thermodynamics through careful explanations of concepts and use of numerous practical examples and figures, having students develop necessary skills to bridge the gap between knowledge and the confidence to properly apply their knowledge.

Sandler presents a modern, applied approach to chemical thermodynamics and provides sufficient detail to develop a solid understanding of the key principles in the field. The text confronts current information on environmental and safety issues and how chemical engineering principles apply in biochemical engineering, bio-technology, polymers, and solid-state-processing. This book is appropriate for the undergraduate and graduate level courses.

The selection of the most adequate thermodynamic model in a process simulation is an issue that most process engineer has to face sooner or later. This book, conceived as a practical guide, aims at providing adequate answers by analysing the questions to be looked at. The analysis (first chapter) yields three keys that are further discussed in three different chapters. (1) A good understanding of the properties required in the process, and their method of calculation is the first key. The second chapter provides to that end in a synthetic manner the most important equations that are derived from the fundamental principles of thermodynamics. (2) An adequate description of the mixture, which is a combination of models and parameters, is the second key. The third chapter makes the link between components and models, both from a numerical (parameterisation) and physical (molecular interactions) point of view. Finally, (3) a correct view of the phase behaviour and trends in regard of the process conditions is the third key. The fourth chapter illustrates the phase behaviour and makes model recommendations for the most significant industrial systems. A decision tree is provided at the end of this chapter. In the last chapter, the key questions are reviewed for a number of typical processes.
This book is intended for process engineers, who are not specialists of thermodynamics but are confronted with this kind of problems and need a reference book, as well as process engineering students who will find an original approach to thermodynamics, complementary of traditional lectures.

Thermodynamics: Fundamentals and Applications is a 2005 text for a first graduate course in Chemical Engineering. The focus is on macroscopic thermodynamics; discussions of modeling and molecular situations are integrated throughout. Underpinning this text is the knowledge that while thermodynamics describes natural phenomena, those descriptions are the products of creative, systematic minds. Nature unfolds without reference to human concepts of energy, entropy, or fugacity. Natural complexity can be organized and studied by thermodynamics methodology. The power of thermodynamics can be used to advantage if the fundamentals are understood. This text’s emphasis is on fundamentals rather than modeling. Knowledge of the basics will enhance the ability to combine them with models when applying thermodynamics to practical situations. While the goal of an engineering education is to teach effective problem solving, this text never forgets the delight of discovery, the satisfaction of grasping intricate concepts, and the stimulation of the scholarly atmosphere.

The classic guide to mixtures, completely updated with new models, theories, examples, and data. Efficient separation operations and many other chemical processes depend upon a thorough understanding of the properties of gaseous and liquid mixtures. Molecular Thermodynamics of Fluid-Phase Equilibria, Third Edition is a systematic, practical guide to interpreting, correlating, and predicting thermodynamic properties used in mixture-related phase-equilibrium calculations. Completely updated, this edition reflects the growing maturity of techniques grounded in applied statistical thermodynamics and molecular simulation, while relying on classical thermodynamics, molecular physics, and physical chemistry wherever these fields offer superior solutions. Detailed new coverage includes:

Throughout, Molecular Thermodynamics of Fluid-Phase Equilibria strikes a perfect balance between empirical techniques and theory, and is replete with useful examples and experimental data. More than ever, it is the essential resource for engineers, chemists, and other professionals working with mixtures and related processes.

Introduction to Chemical Engineering Thermodynamics, presents comprehensive coverage of the subject of thermodynamics from a chemical engineering viewpoint. The text provides a thorough exposition of the principles of thermodynamics and details their application to chemical processes. The chapters are written in a clear, logically organized manner, and contain an abundance of realistic problems, examples, and illustrations to help students understand complex concepts. New ideas, terms, and symbols constantly challenge the readers to think and encourage them to apply this fundamental body of knowledge to the solution of practical problems. The comprehensive nature of this book makes it a useful reference both in graduate courses and for professional practice. The seventh edition continues to be an excellent tool for teaching the subject of chemical engineering thermodynamics to undergraduate students.

The simulation and optimization of processes assumes that the thermodynamic properties and phase equilibria of the mixtures concerned are well known. This knowledge is still based upon experimentation, but it is also the result of calculation methods based on the principles of thermodynamics that govern them, insure their coherence, and confer upon them a wide range of application. This text is concerned primarily with the description of these methods and their evolution. It devotes extensive space to fundamental concepts and places particular emphasis on the models that, although based on simplified concepts of the subject matter at the molecular level, have predictive character. Computational examples are used to explain the application of these concepts and models. Contents: 1. Principles. Thermodynamic functions. The ideal gas. 2. Properties of pure substances. 3. Predicting thermodynamic properties of pure substances. General principles. Corresponding states. Group contributions. 4. Equations of state. 5. Characterization of mixtures. 6. Mixtures: liquid-vapor equilibria. 7. Deviations from ideality in the liquid phase. 8. Application of equations of state to mixtures. Calculation of liquid-vapor equilibria under pressure. 9. Liquid-liquid and liquid-liquid-vapor equilibria. 10. Fluid-solid equilibria. Crystallization. Hydrates. 11. Polymer solutions and alloys. 12. Multicomponent mixtures. 13. Chemical reactions. Appendixes. Index. Bibliography.

Thermodynamics and Statistical Mechanics provides undergraduate chemistry students with a grounding in both classical and statistical thermodynamics. Thermodynamic quantities and relationships are introduced and developed in a coherent way, enabling students to apply thermodynamic analysis to chemical problems with confidence. Each stage in the development is well illustrated with examples. The text aims to help students understand energy, its different forms and transformations, and the key role of entropy, as applied to chemical systems, addressing questions such as: (i) How much work is performed, and how much heat transfer occurs, during chemical processes and reactions, and how do they depend on temperature? (ii) How is it possible for endothermic processes to occur spontaneously, and will a given reaction occur spontaneously? (iii) What determines the equilibrium between phases? (iv) How do temperature and pressure affect equilibrium? (v) What is the meaning of entropy? (vi) How are macroscopic thermodynamic properties related to microscopic energy levels? Ideal for the needs of undergraduate chemistry students, Tutorial Chemistry Texts is a major series consisting of short, single topic or modular texts concentrating on the fundamental areas of chemistry taught in undergraduate science courses. Each book provides a concise account of the basic principles underlying a given subject, embodying an independent-learning philosophy and including worked examples.